Sign in | Register
HomeNew ArrivalsDan & Larry in Don't Do That! 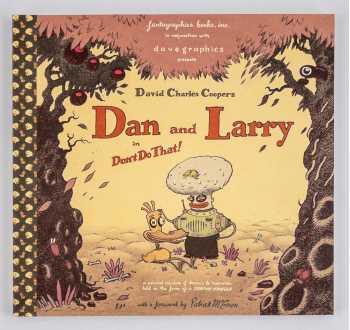 Dan & Larry is Dave Cooper's latest graphic novel for Fantagraphics, following the ultra-successful Suckle and Crumple. Since the debut of Cooper's ongoing comic book series Weasel in 1999, which has already garnered several industry awards after only three issues (including one Harvey Award and two Ignatz Awards), Cooper has become Fantagraphics' most successful creator to debut in the 1990s since Chris Ware (Jimmy Corrigan and The ACME Novelty Library). Cooper is also one of the most idiosyncratic and talented cartoonists working today. Dan & Larry is a twisted fable about an ugly young duckling named Dan and his best pal Larry. Unlike most ugly duckling fables, this duckling stays ugly, and the only way he ever looks good is in contrast to an even uglier world surrounding him. Dan & Larry also features an introduction by Patrick McEown, the successful cartoonist and animator who has known Cooper since childhood and sheds insight into the book's origins.