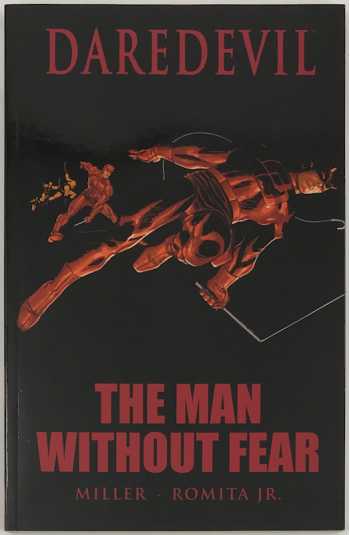 A signed first printing of the expanded 2010 edition after a first collected edition in 1994.

This edition adds 64 pages of extras, including Miller's original 43-page typed story and 20 pages of art.

A fire burns deep within Matthew Murdock. Tormented by others when he was a child, Matt was forbidden to fight back by his father--prizefighter Battlin' Jack Murdock. When Battlin' Jack is slain by mobsters for his refusal to throw a bout, young Matt vows vengeance. And thus all the rage buried inside the youth was given frightening focus. Soon, a masked vigilante stalks the dark streets of the city--silent, swift and relentless. And behind the mask is the solemn visage of Matt Murdock... a face his underworld victims will never see. Though, in time, they will come to curse the name he is now known by: Daredevil, Man Without Fear!