Sign in | Register
HomeNew ArrivalsDaydreams and Nightmares: The Fantastic Visions of Winsor McCay 1898-1934 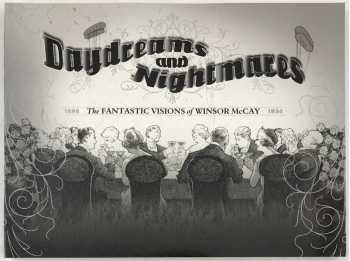 This is the redesigned, larger (14" x 10") second edition of Daydreams and Nightmares originally published by Fantagraphics in 1988. Out of print.

It collects over 100 editorial cartoons as well as rare early strips. It also reprints two essays written by McCay: From Sketchbook to Animation (1927) and On Being a Cartoonist (1926).

Daydreams & Nightmares collects the rarest work from Little Nemo In Slumberland creator Winsor McCay's historic career. A fantasist of the first rank, McCay was a key pioneer in the histories of both comics and animation. He had a fascination with dreams that extended beyond his newspaper strip Little Nemo in Slumberland, and it was a fascination as compelling as that of Freud, Jung and Adler's, as proven in the pages of Daydreams & Nightmares. McCay's dream-inspired strips, illustrations and cartoons feature rarebit-induced nightmares, playful "what-ifs," moralistic panoramas, pictorial allegories and other fantastic visions. The highlights of the book are McCay's Dream of the Rarebit Fiend strips created for the New York Evening Telegram in 1905, as well as early efforts like A Pilgrim's Progress, Poor Jake, Day Dreams, Rabid Reveries, Little Sammy Sneeze ("He never knew when it was coming!") and more. The artwork in this book includes outstanding examples from several categories of McCay's career: illustrations from his first paper, the Cincinnati Enquirer; anti-war and anti-materialist cartoons; playful strips for Life magazine; early dream sequences; futuristic illustrations for the New York Herald; and allegorical and editorial cartoons for the Hearst newspapers. The book spans the years 1898-1934, the bulk of McCay's career. McCay's world was the world of playfulness and whimsy that most leave behind in youth and encounter again only in dreams; Daydreams & Nightmares is a tour through that world.