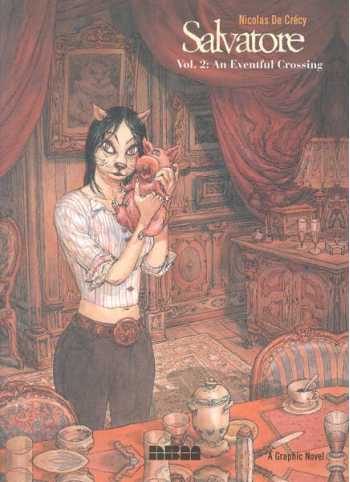 This is De Crecy’s most recent series and it is by far his lightest, happiest comics work with a freer looser style and the most "animated" sequences of any of his albums.

The next chapter of this highly acclaimed off-the-wall nominated for an Eisner series that never ceases to astonish and amuse! Salvatore the crack dog mechanic has now finished his rig and is off to all the way out somewhere in Latin America to his sweetheart pooch he has been pining for. His trip which he takes with his reluctant assistant, a minuscule human who communicates only through his PC, goes all the way through Russia and the Bering Straits, a route he characterizes as epic but is really designed to avoid the seas which Salvatore is deadly afraid of. On the way, there are many temptations such as the pretty cat Julie who, as it turns out, has adopted the missing piglet Amandine the Sow has been so desperately spending her last penny trying to find while, unbeknownst to her, the rest of her litter is busy in a lucrative endeavor of bio recycling.

"Things are constantly moving in this book, even if, like Salvatore discovers, all that movement wound up plopping him back at the beginning of the journey. De Crecy ensures the reader that the fruitlessness of Salvatore’s journey doesn’t extend to the entertainment value and sheer delight found in his cartooning."
– High-Low

"What I interpreted as inane, random dialogue in the first book has transformed into solid (and funny) characterization. I was wrong to dismiss this book as an artist’s self-indulgence, and hope now to correct my error. “Salvatore” is initially hard to embrace, because it is a story that refuses to conform to expectation and classification. But it’s that very quality that’s making it a unique and entertaining read for me now."
-Andrew "Capt. Comics" Smith