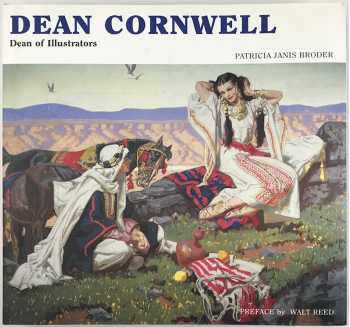 Dean Cornwell (1892 – 1960) was an American illustrator and muralist. His oil paintings were frequently featured in such popular magazines as Redbook, The Saturday Evening Post, Harper's Bazaar, Cosmopolitan, and Good Housekeeping; on book jackets; and national advertising for five decades. The first half of his career was influenced by his instructor painter Harvey Dunn. In the second half of his career, Cornwell sought out and worked under illustrator and muralist Frank Brangwyn on multiple mural commissions and showed Brangwyn's influence for the balance of his career.

This was the first art book devoted to Cornwell and featured numerous drawings and preliminaries in addition to finished paintings. It has in total, 63 color plates and 236 black & white illustrations.

This is the 2000 reprint of the original 1978 edition. The original plates were used for this reprint and the quality of reproduction between the two editions is nearly identical.