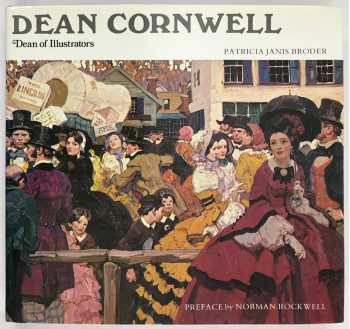 A sharp copy of the original edition of this great book on this American illustrator & muralist. This book has 63 paintings in color, additional paintings reproduced in black & white, and a treasure trove of Cornwell's pencil drawings and studies that he created preliminary to painting.

A necessary volume for any illustration library.

Dean Cornwell, in his magazine and book illustrations, posters, calendar art, and advertising art recaptured decade by decade the image, spirit, and style of twentieth-century America. For over three decades Cornwell was regarded "Dean of American Illustrators." He was the instructor and the idol of a generation of illustrators and his work was admired in households across the United States.

One of America's most gifted draftsmen and a master of composition, Cornwell began his career as an illustrator in 1914 and worked until his death in 1960. His great technical facility enabled him to paint in different styles and to adapt to the needs of his varied assignments

Cornwell's work appeared regularly in such popular magazines as Redbook, The Saturday Evening Post, Harper's Bazaar Cosmopolitan, Good Housekeeping, and The American Magazine. He illustrated the stories of many outstanding authors of the day: W. Somerset Maugham, Owen Wister, Pearl S. Buck, Edna Ferber, and Ernest Hemingway. In addition to his success as a magazine and book illustrator, Cornwell was one of America's most popular muralists. Today his murals decorate over twenty public buildings.

Dean Cornwell not only gave visual form and color to the stories, historical events, and commercial products he depicted, but his paintings expressed the aesthetic and social values of each period in which he worked. His illustrations reflected the interests, concerns, and dreams that characterized each of five decades. The changes in Cornwell's style and subject mirror the changes in American culture in the twentieth century.