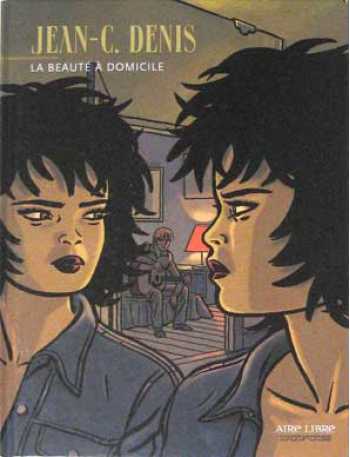 A relationship story told in a modern clear line style.

From the publisher:
"For the first time, Jeff really has the impression of being with another Angela. A cold, hard, aggressive Angela, the extreme opposite of "his Angela". More than the accident itself, it is Angela's attitude that concerns Jeff. She has an expression that he does not recognise. It is a very unpleasant feeling. A little later, when dropping her off at her appointment, Jeff is relieved to free himself from this strange presence.

"This stranger... The impression he got the very first time he saw Angela was that she was different. There was nobody like her. He immediately thought that she came from somewhere else, from another world. That is exactly what straightaway made him feel that Angela was so close, so familiar. That is, until today.

"A musician, illustrator, scriptwriter and cartoonist, Jean-Claude Denis, born in Paris on 1 January 1951, accomplishes everything with indisputable class and talent.

"A real one-man band, he worked in advertising and illustration and produced many book covers for the main French publishers before turning his hand to cartoons in Pilote and A Suivre."