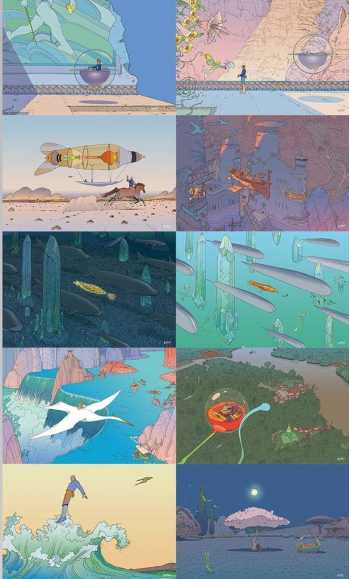 "The journey must go on... From world to world, from town to town, from heart to heart, we go, unwavering... Joyful or nostalgic, but always and forever bearing the strange yet familiar perfume of life."

Rediscover ten illustrations from the World of Edena, in a postcard format, and make your pen pal glad with a unique graphic journey !

Six of the ten illustrations are from the “Les Voyages d’Hermès” project. Some background from Heavy Metal:

French illustrator Jean “Moebius” Giraud is among the elite science fiction and fantasy artists of all time, and the 2010 “Les Voyages d’Hermès” project demonstrates that on a few levels. It’s a stunning work, telling a loose story about a voyage aboard a giant bird — the nine-image portfolio is as elegant a feast for the eyes as any Moebius created in his career.

There’s more to it than that, though — these nine plates were created for the Hermès fashion house, which has a fragrance called “Voyage.” Begging an obvious question: Why? What does this collection of images have to do with the Voyage d’Hermès’ fragrance, or even its brand? The fact is, they have almost nothing to do with each other.

That’s the beauty of being Moebius, the greatest (then) living French illustrator: When a French luxury brand like Hermes comes calling, you don’t have to illustrate ladies spritzing fragrances, or products at all, if you don’t want to. Hermes just wanted some of that Moebius magic to express the magical “voyage” its perfume might evoke.

A curious detail of this story (reported by Sci-Fi-O-Rama and others) is that these images were created using digital technology, a Wacom Cintiq tablet, which is remarkable for an artist who was then 72 years old and had created some of the masterworks of comics using pen and paper.

These images were published in 2010, and is among the last significant work (along with Faune de Mars from 2011) Moebius produced before his death in 2012.