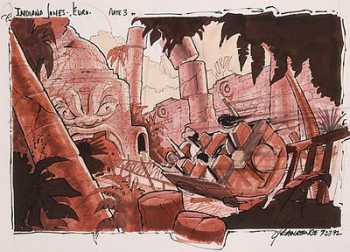 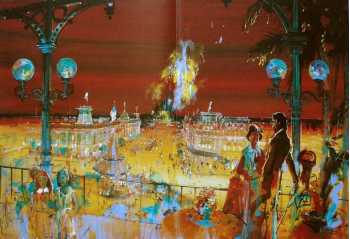 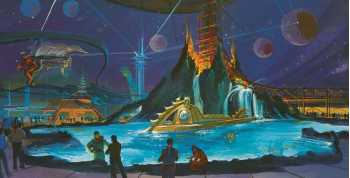 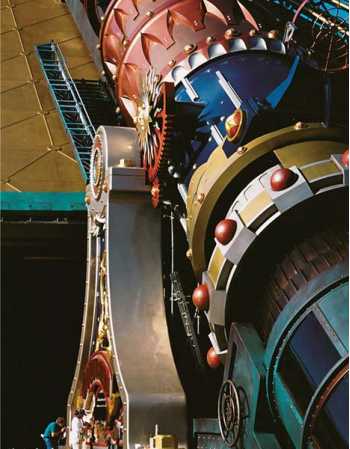 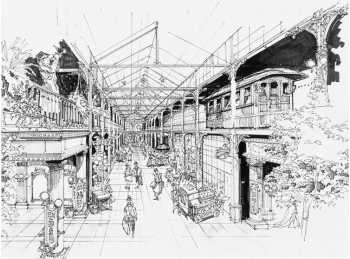 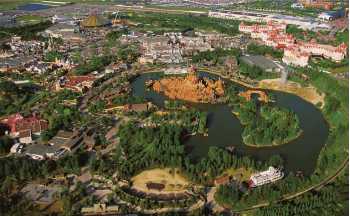 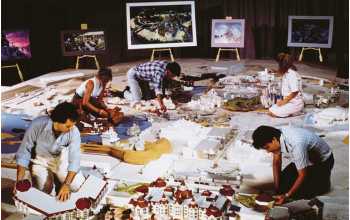 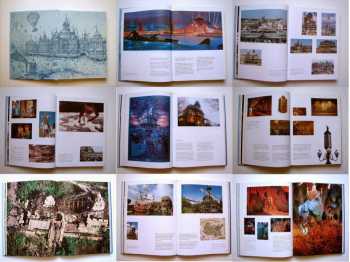 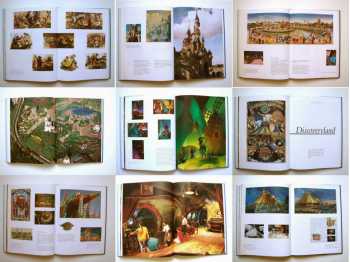 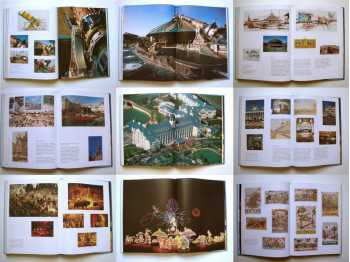 One of the most collectible books about Disney parks ever published.

This thick volume features 750 color pictures: 500 are high quality photos of the park (many document individual set designs or elements of the park and many are of the Imagineers working on the park) and 250 are renderings from Walt Disney Imagineering! The text by Disney historian Didier Ghez was written after more than 75 interviews conducted with all the Imagineers who created the park.

The first chapter about Main Street has 52 pages and introduces the reader to the "legend" of Main Street, USA. You'll learn all about the Disneyland Paris Railroad, the unique "Discovery" and "Liberty" Arcades; find out about the architecture, the restaurants (like "Walt's," a tribute to Walt Disney, but also inspired by Club 33 in Anaheim) and the shops; with dozens of photos, renderings, models, as well as the "cities of the future" posters located in the "Discovery Arcade."

The second chapter on Frontierland discusses the park's western side, with extensive sections about its major attractions, "Big Thunder Mountain" and "Phantom Manor." In fact the book has the longest sections ever put together in a book on all the major attractions. The Pirates of Caribbean section in the Adventureland chapter is 26 pages, Phantom Manor has an additional 16 pages devoted to it, as does Space Mountain, it's a small world, etc. The photo material was so great that we kept adding more pages to the book, which was supposed to have only 240 pages when we started... we ended up with 320 upon completion!

The Frontierland chapter also covers the Mark Twain Riverboat, the River Rogue Keelboats, Fort Comstock, all the restaurants, the shops and Cottonwood Creek Ranch - and featurs stunning photos of Disneyland Paris from the air by Yann Arthus Bertrand, author of The Earth from Above that make spectacular "double-pages," and allow the reader to discover the park from a whole different angle.

The Adventureland chapter is even more interesting, as many elements of the land exist only in Paris - such as the Bazaar and Aladdin to Africa and the ex-"Explorer's Club." Plus there's a long section about "Indiana Jones and the Temple of Peril," "Adventure Isle" and "The Swiss Robinson Treehouse" and, of course, "Pirates of Caribbean" the land's major attraction and featuring its amazing Audio-Animatronics! All in all there are 56 full pages about Adventureland, and as in the previous chapters, there are dozens of photos, lots of concept art, and many shots of Imagineers at work. There's even a great bonus here, with the Marc Davis artwork for "Pirates" also included.

56 full pages are also dedicated to Fantasyland. There's an extensive look at Sleeping Beauty Castle, sections on all the dark rides (Snow White, Peter Pan and Pinocchio), as well as a look at "Alice's Curious Labyrinth," the "Mad Hatter's Tea Cups," "Storybookland," and "Casey Jr." There are even 14 pages about "it's a small world" with stunning photos of nearly all the scenes in it. Here, the reader can discover a new attraction that exists only at Disneyland Paris, with a great view from above of Alice's Labyrinth.

Discoveryland also gets 52 pages of special treatment, with sections on the Visionarium, the Nautilus, Star Tours, Space Mountain, and everything you wanted to know about the other attractions in this land – Autopia and Orbitron.

In fact, the Nautilus chapter takes you on a visit with photos of every room of this detailed walk-through and two double page photo spreads, one which makes you feel you're inside Captain Nemo's grand salon, and the other showing you a unique view of Discoveyland featuring the Nautilus and Space Mountain in a kind of "CinemaScope" view.

When the book was released in early 2002, the Walt Disney Studios didn't exist, so you won't see it in the book (This is Disneyland Paris as it was in its glory days). But there's still one last chapter about the hotels of the park, and Disney Village too, with the great Buffalo Bill Wild West show that entertains hundreds each evening. And because every day in a Magic Kingdom should end with a parade and fireworks, the Main Street Electrical Parade heads down Main Street with fireworks high above the castle in this gorgeous Herb Ryman painting which closes the book!

Although 2,000 copies of the English language Collector’s Edition had been authorized, only 1,270 had been produced due to printing expenses and other reasons back in 2002.  So this new print run of 730 copies completes the edition of 2000.