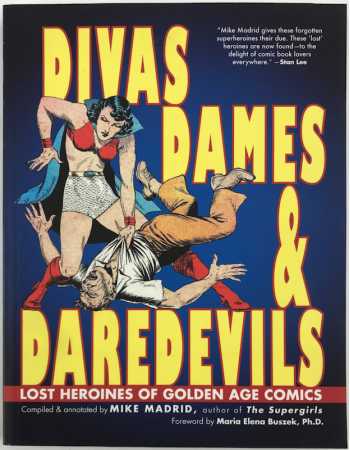 "Mike Madrid gives these forgotten superheroines their due. These 'lost' heroines are now found--to the delight of comic book lovers everywhere." -- STAN LEE

Wonder Woman, Mary Marvel, and Sheena, Queen of the Jungle ruled the pages of comic books in the 1940s, but many other heroines of the WWII era have been forgotten. Through twenty-eight full reproductions of vintage Golden Age comics, Divas, Dames & Daredevils reintroduces their ingenious abilities to mete out justice to Nazis, aliens, and evildoers of all kinds.

Each spine-tingling chapter opens with Mike Madrid's insightful commentary about heroines at the dawn of the comic book industry and reveals a universe populated by extraordinary women--superheroes, reporters, galactic warriors, daring detectives, and ace fighter pilots--who protected America and the world with wit and guile.

In these pages, fans will also meet heroines with striking similarities to more modern superheroes, including The Spider Queen, who deployed web shooters twenty years before Spider Man, and Marga the Panther Woman, whose feral instincts and sharp claws tore up the bad guys long before Wolverine. These women may have been overlooked in the annals of history, but their influence on popular culture, and the heroes we're passionate about today, is unmistakable.