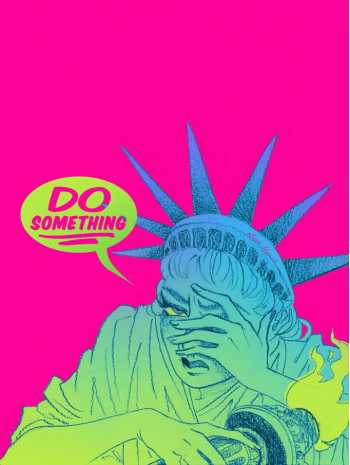 "I never thought I'd make a piece of political art but America is being made 'great' again so terrifyingly quickly that I have to join my fellow activists and do something. I marched in the Women's March along with 4+ million people around the world. I'd never even posted a political statement on the internet before, let alone shouted in the street. I'd much rather be at home drawing chicks and unicorns but active resistance is more important right now. What is happening to our country is not ok. We all have to find our strengths and as an artist, this is something I can contribute. So I'm making this poster and putting it out into the world everywhere I can. Join me."

A portion of the sale price has been donated to the ACLU.

Eliza Frye is a graphic novelist and illustrator (by way of the Character Animation program at CalArts). Her comics have been featured in literary magazines and anthologies in the United States and Europe. Her short story "The Lady's Murder" was nominated for a 2009 Eisner Award.