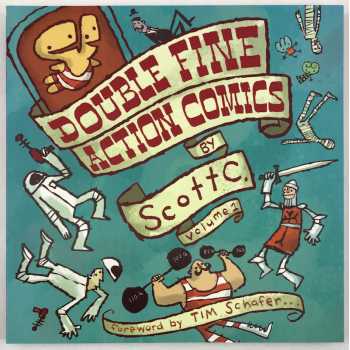 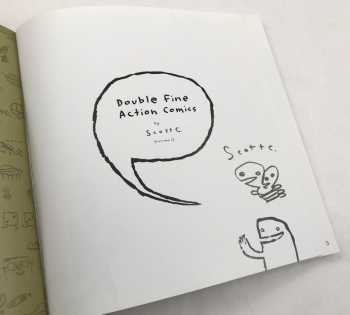 Signed by the artist with a drawing.

The first 300 of the original Double Fine Action Comics by Scott C (occasionally in full-color splendor) plus tons of behind the scenes extras like: a sultry centerfold, "Evolution of a dude", "The Help Knight get to the Slaying the Dragon Without Getting Distracted Game", early brainstorm session concept artwork with notes from Scott C, Comic commentary on hand picked comics, How to Draw DFAC characters!

Scott Campbell (Scott C) is a maker of paintings, illustrations, comics, kid's books and video games. He studied illustration at the Academy of Art in San Francisco, focusing on comic and children's book illustration. Soon after graduating, he began at Lucas Learning as concept artist on children's video games. Four years later, he joined Double Fine productions as Art Director on such games as the critically acclaimed Psychonauts and Brutal Legend. Alongside this career in games, he has published numerous comics and created paintings that have appeared in galleries and publications around the world. Some of his most notable projects include the GREAT SHOWDOWNS series, "Igloo Head and Tree Head" series, Double Fine Action Comics, Hickee Comics, the Zombie In Love children's book, and Psychonauts and Brutal Legend with Double Fine Productions. Scott lives in New York City.