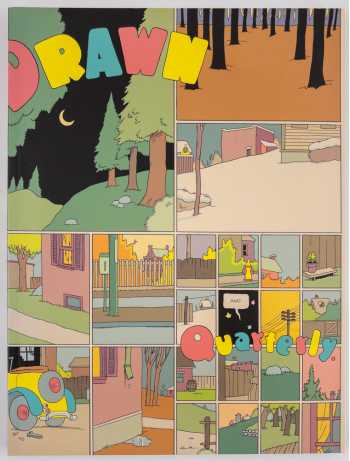 Drawn & Quarterly's significance as a comic book publisher is evident in its latest anthology, an oversized, full-color, beautifully produced paperback featuring the work of 10 cartoonists and illustrators from Europe and North America. The volume provides both a sense of comics over the last 75 years and an idea of where the medium is heading. The star of this issue is the seminal cartoonist Frank King, creator of the long-running newspaper strip, Gasoline Alley. Not only were King's Sunday strips stunningly beautiful, but he created the first "funny page" characters that actually aged. Included here is a piece written by King about Gasoline Alley, and 30 full-color Sunday strips from the '20s and '30s. A series of strips and covers drawn in King's style by celebrated comics artist Chris Ware completes the homage.

R. Sikoryak's Dostoyevsky Comics is drawn in the style of Bob Kane's 1950s Batman comics, creating a strip that cleverly deconstructs the graphic novel Batman: Two-Face A Crime and Punishment, Russian literature and American comic books. New Yorker cartoonists Dupuy and Berberian's 55-page "Monsieur Jean" is the sophisticated story of a novelist and his rather complicated personal life. Imitating the style of an airline safety card, Jason Little's "Safety Instructions" details a sudden emergency on a Virgin airlines flight that prompts two abruptly amorous young passengers to realize they both have "things I need to do before I die."

This is an impressive, wide-ranging and international collection of illustrated storytelling with over 300 color illustrations.