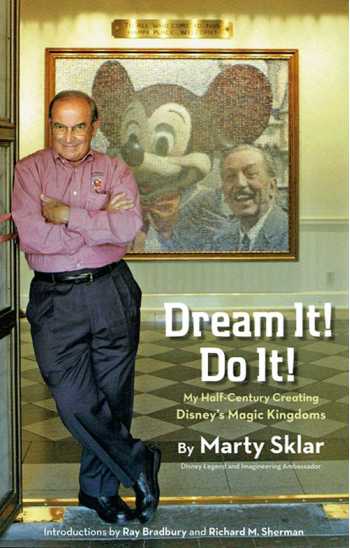 Marty Sklar was hired by The Walt Disney Company after his junior year at UCLA, and began his Disney career at Disneyland in July 1955, the month before the park opened. He spent his first decade at Disney as "the kid," the very youngest of the creative team Walt had assembled at WED Enterprises. But despite his youth, his talents propelled him forward into substantial responsibility: he became Walt's speech writer, penned Walt's and Roy's messages in the company's annual report, composed most of the publicity and marketing materials for Disneyland, conceived presentations for the U.S. government, devised initiatives to obtain sponsors to enable new Disneyland developments, and wrote a twenty-four-minute film expressing Walt's philosophy for the Walt Disney World project and Epcot. He was Walt's literary right-hand man.

Over the next forty years, Marty Sklar rose to become president and principal creative executive of Walt Disney Imagineering, and he devoted his entire career to creating, enhancing, and expanding Walt's magical empire. This beautifully written and enlightening book is Marty's own retelling of his epic Disney journey, a grand adventure that lasted over half a century.

Marty Sklar was a student at UCLA and editor of its Daily Bruin newspaper in 1955 when he was recruited to create an 1890s-themed newspaper, The Disneyland News, a month before the theme park opened. After graduating, he joined Disneyland full-time in 1956, where he held responsibility for most of the park's publicity and marketing materials.

In 1961, he moved to WED Enterprises, renamed in 1986 to Walt Disney Imagineering, where he worked on attractions for the 1964 New York World's Fair. For nearly ten years, he wrote personal materials for Walt Disney for use in publications, television and special films. In 1974 he became vice president of concepts/planning, and guided the creative development of EPCOT.

Very Fine in a Near Fine dustjacket