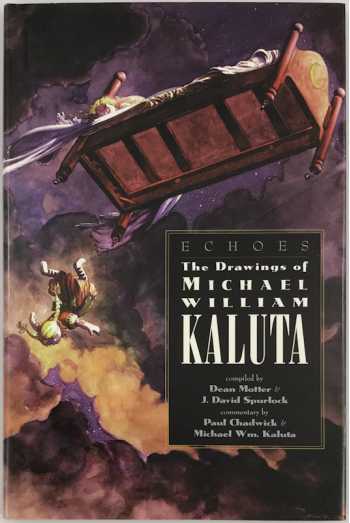 Echoes: The Drawings of Michael Wm. Kaluta spans the career of one of the most adventurous fantasy artists of our time. From Robert E. Howard's Hyborian age through the noir era of Darkman and The Shadow to the delightfully retro sci-fi worlds of Starstruck and Metropolis, Echoes reveals hundreds of classic, rare, and previously-unpublished works.

Echoes collects drawings from the myriad periods of Kaluta's notable career and reveals the artist's unique passion for historical accuracy and unbridled fantasy, traits that have inspired more than one generation of artists and aficionados. Michael William Kaluta has been referred to as the artist's artist. He has earned that reputation by immersing himself in the worlds he draws, offering up his visions with painstaking detail -- from Robert E. Howard's Hyborian Age through the noir era of The Shadow to the delightfully retro sci-fi worlds of Starstruck, and all places in between. Commontary by the artist, Paul Chadwick, Neil Gaiman and compilers Dean Motter and J. David Spurlock.