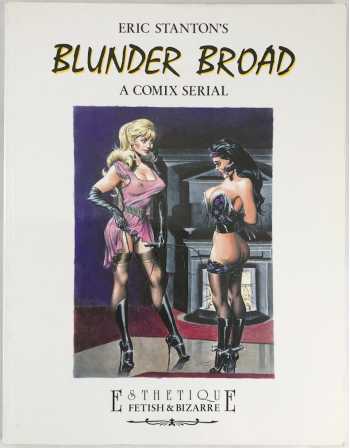 A large format collection of Eric Stanton's fetish comix serial Blunder Broad (written by Turk Winter). With an Introduction by Marco Giovannini, a second introduction by Stanton, and extra artwork and photos from Stanton's files.

The book is tri-lingual: all the text is in English, Italian and French.

Eric Stanton (1926 –1999) was an American underground cartoonist and fetish art pioneer. While Stanton began his career as a bondage fantasy artist for Irving Klaw, the majority of his later work depicted gender role reversal and proto-feminist female dominance scenarios. Commissioned by Irving Klaw starting in the late 1940s, his bondage fantasy chapter serials earned him underground fame. For a decade, Stanton also shared a working studio with Marvel Comics legend Steve Ditko during the creation of Spider-Man and Dr. Strange. The two artists were known to have assisted on each other’s art. Past the soft-core era of the 1960s, his art became more transgressive. Creating a mail-order business in the 1970s, Stanton sold his work directly to fans till the time of his death. In his lifetime, Stanton also contributed to countless underground publications. Artists Banksy, Allen Jones and Madonna, among others, would take inspiration from Stanton's work. - Wikipedia