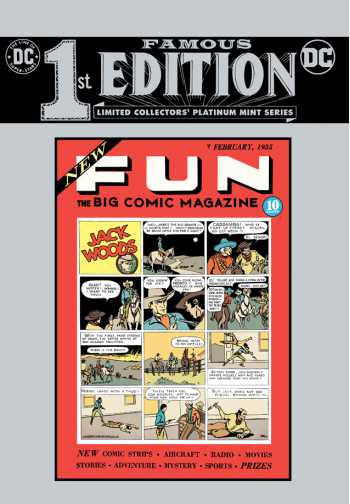 Comic book history in your hands!

For the first time ever, the very first comic book published by DC Comics is reprinted. Originally published at the start of 1935, NEW FUN COMICS #1 made history as the first comic book made up of new stories instead of reprints of newspaper comic strips. Cowboys, gunfighters, adventurers and soldiers of fortune populated these pages, each of which is a separate story in the style of Sunday newspaper comic strips of the 1930s, including some written by Major Malcolm Wheeler-Nicholson, the founder of the company that would become DC Comics. This tabloid-sized, black and white comic book is reprinted as a commemorative hardcover and will include historical essays and other special features.