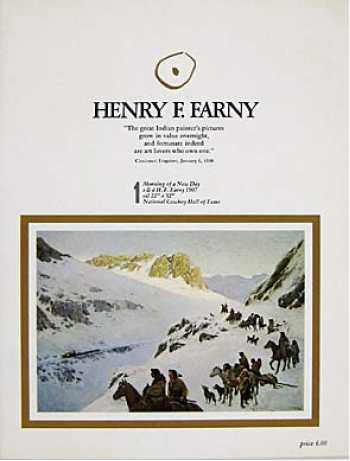 Henry Farny is probably the foremost painter of the American Indian and the “Old West” landscapes. Unlike his predecessors, who painted Indians as anthropological specimens, and western scenery as a geological and geographical record, Farny felt that “the plains, the buttes, the whole country and its people are fuller of material for the artist than any country in Europe.”
Unlike most of his contemporaries who were painting in the broad Munich school, Farny adhered to his miniature-like technique and “rendered faithfully what nature offered to the eye,” as one of his critics said. Farny gave his own conception of nature simply and truly. It was a style not at variance with the taste of his era; it leaned towards the tendencies of the art of his period.
Farny was one of the first to paint the Indians and to give us an insight into their emotional life rather than a records of their customs and habits of living. He had the great gift of being able to give with vivid brush the facts of Western pioneer life without being sentimental about the romantic life of the Indian and the West.
Exhibition catalog.