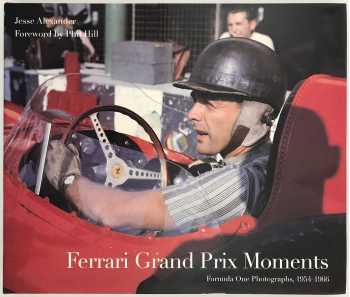 Signed by the photographer Jesse Alexander. Out of print.

Legendary motorsports photographer Jesse Alexander produced some of his most memorable images while following Scuderia Ferrari on the European Grand Prix circuit between 1954 and 1966. Alexander's photographs reflect an unsurpassed level of access, both in terms of where he was free to explore and work, and more important, in the openness of his subjects. It's this quality that gives his images their unusual intimacy. Drivers and team principals appear relaxed and unguarded, a result of his personal friendships and familiarity with his subjects. These photographs have a distinctive sense of a fleeting moment captured, which inspired this book's title: at Reims in 1956, veteran Juan Manuel Fangio holds court with his young teammates Eugenio Castellotti, Peter Collins, and Olivier Gendebien; on a chilly winter day in 1957, Enzo Ferrari is bundled up for a test of Luigi Musso's Lancia-Ferrari D50 at the Modena Autodromo; at Spa in 1961, Wolfgang von Trips warmly congratulates Phil Hill on their one-two finish, a race Hill won from the pole. The sense of the moment is often enhanced by dramatic lighting, such as dark shadows on the Monza track cast by sheltering trees, or sunlight streaming through the Ferrari factory windows, illuminating unpainted race cars. Though he is best known for his black-and-white work, Alexander's early color images are also featured. The photographs presented here vividly depict an era of great change and growing challenges to Ferrari in Formula One. After scoring two championships with Alberto Ascari in 1952 and 1953, Ferrari faced formidable competition from Mercedes-Benz in 1954, followed by a host of new British teams in the late 1950s and early 1960s. That period would also see Ferrari make the long-anticipated shift from the front-engined Lancia-Ferrari D50 and Dino 246 to the rear-engined Dino 156 that would restore the team's dominance in 1961. In Ferrari Grand Prix Moments, Jesse Alexander offers his personal perspective on the people, places, and events that made the 1950s and 1960s a defining period in the history of the marque that more than any other has come to define Grand Prix racing.