Sign in | Register
HomeNew ArrivalsFire & Water: Bill Everett, the Sub-Mariner and the Birth of Marvel Comics 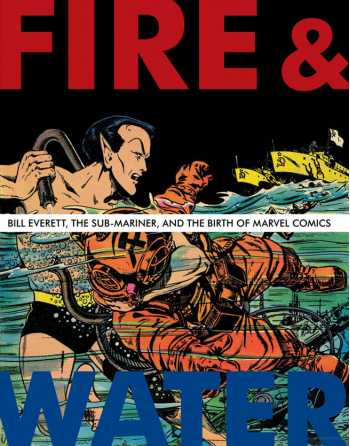 The definitive biography of this comic book artist whose career spanned from the Golden Age to the seventies.

A biography and "best of" collection showcasing the man who co-created Marvel Comics.

70 years ago, a new publishing company named Marvel Comics stuck its toe into the first waters of the comic book industry. Before they became a pop culture powerhouse publishing famous superheroes like Spider-Man, the Incredible Hulk, and Iron Man, Marvel's first ever comic book featured a daring new anti-hero named the Sub-Mariner, created by legendary artist Bill Everett. 70 years later, Everett's watery creation continues to be one of the pinnacles of the Marvel Universe of superheroes, as attested to by its recent option as a major motion picture.

Bill Everett invented comics' first anti-hero in 1939; an angry half-breed (half-man, half sea-creature) that terrorized mankind until uniting with the Allied Forces to conquer fascism's march across Europe during World War II. But the reasons to celebrate Bill Everett's monumental career in comics books don't stop with his water-based hero. Everett was a master of many comic genres, and was one of the pre-eminent horror comic-book artists in the 1950s (before government and societal pressures led the comics industry to censor itself with the imposition of the Comics Code Authority), producing work of such quality and stature that he ranked alongside the artists who produced similar material for the justifiably lauded EC Comics.

Bill Everett: Fire & Water is the latest book from Blake Bell, author of the acclaimed Strange and Stranger: The World of Steve Ditko, and is being produced in cooperation with the Everett family. It will feature the definitive biography of the man and his career, and how his personality informed his signature character, before his untimely passing at the age of 55 in 1973. The main focus, however, will be the stunning display of artwork that few artists can match in breadth and quality. From the superhero and horror genre, to the mid-west, romance, crime, and suspense, Bill Everett was a master of the medium -- all on display in this coffee table art book that is destined to ensure Everett's place at the table of premier comic book virtuosos.