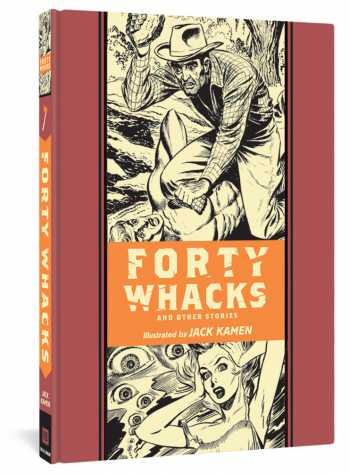 Jack Kamen's precise, clean style was perfect subversion for EC Comics tales of seemingly normal men and women who cooly act on the rage, jealousy, and greed just below their glamorous façades. Kamen's crime capers include 'Forty Whacks' (Whatever became of that ax Lizzie Borden used?), 'Contract for Death' (A suicidal man agrees to accept $5,000 for his fresh corpse, then changes his mind. But the contract fails to specify that the body has to be his!), 'The Neat Job!' (Her 'neat freak' husband drove her crazy, so when she chopped him up into little pieces!), 'Just Desserts!' (A madman bent on revenge hosts a dinner for his victims--and the final course is a killer!) -- plus 20 more gripping tales of tension as only EC could do them! Like every book in the Fantagraphics EC Artists' Library, Forty Whacks And Other Stories also features essays and notes by EC experts on these superbly crafted, classic masterpieces.

The Brooklyn-born Jack Kamen (1920-2008) began his career as a pulp illustrator and spent his last professional decades as an illustrator, but is best remembered for his half-decade at EC (and his 1982 contributions to the EC-inspired movie Creepshow).