Sign in | Register
HomeNew ArrivalsFoul Play! The Art and Artists of the Notorious 1950s E.C. Comics! 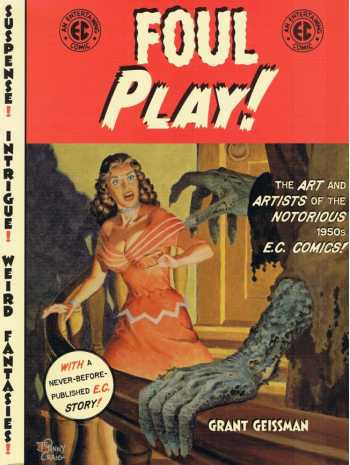 A great and lively EC reference book by EC authority Grant Geissman. Includes the first publication of the lost EC story "Wanted for Murder!" with art by Al Williamson.

Legendary publisher Bill Gaines is perhaps best remembered as the founder of MAD Magazine, but in the opinion of many dedicated comic book fans, his greatest achievement was E.C. Comics, a line of adventure, horror, and science-fiction comics whose influence on American graphic novels is undeniable, even today. Foul Play! is the perfect book for anyone wanting to understand the special place E.C. holds in the comic fan's heart -- or who just wants to read some real good comics!

Foul Play! celebrates the fan-favorite creators of E.C. Comics, profiling their artists -- a veritable who's who of mid-20th century popular illustration -- and describing how they came to work with Bill Gaines and how their careers evolved after E.C.. Among the comics art legends profiled are Al Feldstein; Harvey Kurtzman; Johnny Craig; Jack Davis; Graham Ingels; Jack Kamen; Wallace Wood; Joe Orlando; Will Elder; John Severin; George Evans; Al Williamson; Reed Crandall; Bernie Krigstein; and more! Plus, the book includes a special bonus: a lost E.C. Comics story "Wanted for Murder!" originally intended to be published in 1956 but forgotten and unseen until now.

When originally published, E.C. Comics titles like Tales from the Crypt, The Vault of Horror, and Weird Science became best-selling titles, embraced by readers for their macabre wit and stunning illustration. Eventually, E.C. Comics ran afoul of a full Senate Subcommittee investigating (but never proving!) the link between comic books and juvenile delinquency, but not before winning a legion of fans that still treasure E.C.'s output. Foul Play! demonstrates -- in glorious, gory detail -- exactly why these are among the most beloved comics stories ever published.

Driven out of business by self-appointed moral guardians a half-century ago, EC comics have acquired near-legendary status. EC scripts may have been several notches better than those of the competitors, but EC's stellar roster of artists is what makes fans so esteem the EC line. It is fitting, then, that this coffee-table tribute focuses on those illustrators. Geissman, co-author of Tales of Terror (2000), an exhaustive overview of EC, provides informative, insightful biographical sketches of 14 leading lights; full-color covers, story pages, and panels (including rare pre-EC work) by the subject and photos and other memorabilia illustrate, and a complete story concludes, each sketch. Geissman's coverage extends post-EC, when such artists as Wally Wood and Al Williamson maintained successful careers in comics, while others, such as Jack Davis and Johnny Craig, moved to commercial art; one EC mainstay, Graham Ingles, disappeared altogether. A colorful, in-depth survey that will grab EC's many devotees, comics fans who have enjoyed its subjects' subsequent work, and generalist pop-culture vultures alike. -- Gordon Flagg, Booklist

"A beautiful and long overdue art book, but more than that a fascinating look at the artists behind the art." -- Michael Mignola, creator of Hellboy

"Here's an easy review: If you have any interest in E.C. Comics, you need a copy of Foul Play." -- Mark Evanier, author of MAD ART