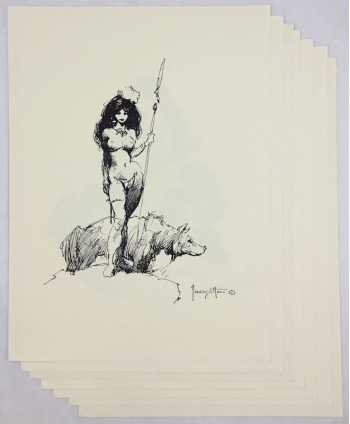 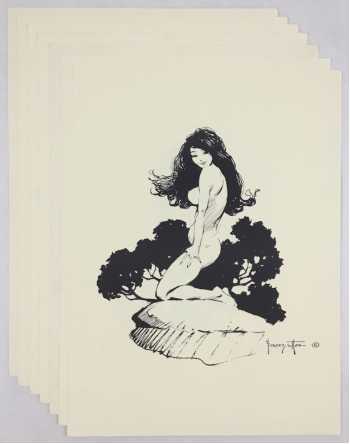 This was the very first of the Frank Frazetta portfolios published by Middle Earth. The next three were The Lord of the Rings (1974), Kubla Khan (1977), and Women of the Ages (1977).

This first portfolio, comprised of seven 11 x 15 inch black & white plates, was not signed or numbered, and it was issued in a plain mailing envelope. This set, like most, is lacking the original mailing envelope.

Some background courtesy of Chuck Rozanski:

The story begins in 1973, when Dennis Wakabyashi, the owner of one of Denver's first comics shops, took on a young protege' with a love of comics art. Steve Allen was a fan of all the great creators of the early 1970's including Frank Frazetta, Barry Smith, Jeff Jones, John Severin, Frank Brunner, Mike Ploog, Howard Chaykin, and many more. Aside from simply collecting their artwork for himself, Steve also convinced Dennis to publish a portfolio of Frank Frazetta sketches that they purchased from Frank's wife, Elly, at a convention.

This first "Middle Earth" portfolio was an immediate success, and because it had a print run of only 500 unsigned editions, it sold out almost immediately. In their naïveté, however, Steve and Dennis did not realize that ownership of the art did not also grant them publishing rights. As a result, a cease-and-desist letter from Frazetta soon arrived. Rather than letting this setback end their publishing efforts, Dennis, wrote back to Frazetta offering him both retroactive royalties on that first portfolio, and upfront cash for a second. When Frazetta agreed, a lifelong friendship resulted.

With Frank Frazetta on board as their first artist, Steve and Dennis were able to quickly line up almost all of their favorite creators for portfolios. The period between 1973-1977 saw the publication of more than a dozen signed and numbered Middle Earth portfolios.

Near Fine (light wear to the edges and corners, very clean)
Limited to 500 copies