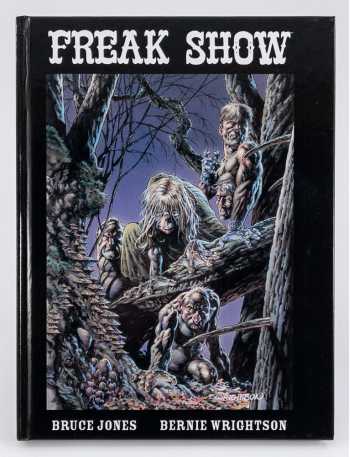 This is a Limited Edition signed and numbered by Bruce Jones (the writer) and Bernie Wrightson (artist). Limited to only 700 copies.

This out of print volume publishes the complete 44-page Freak Show (originally serialized in Heavy Metal and collected for the first time in an American edition) as well as three short stories (Out on a Limb, The Task, and Nosferatu) from Wrighton's early pre-Warren period.

A humble man, lonely at heart, seeks out the rejected 'special people' of the world, taking these misbegotten outcasts under his wing in a traveling show of oddities, performing from town to town. In his kind, yet lonely journey, this man of compassion also seeks something else, a mate -- someone to love -- willing to return all the kindness he's shown his less fortunate troup of oddities. When he finds that someone, his life is complete ... until her pregnancy. She gifts him with a 'special' child of his own. His fury at God and the world for such a betrayal, drive him to a state of revenge and hatred that reveals his true inner self.