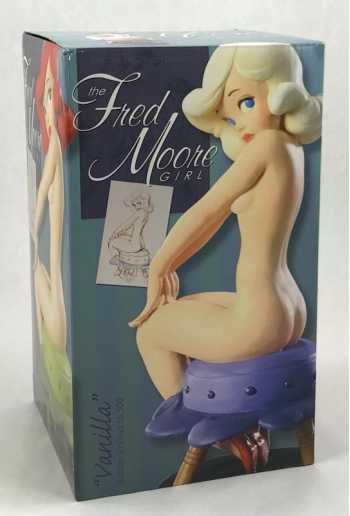 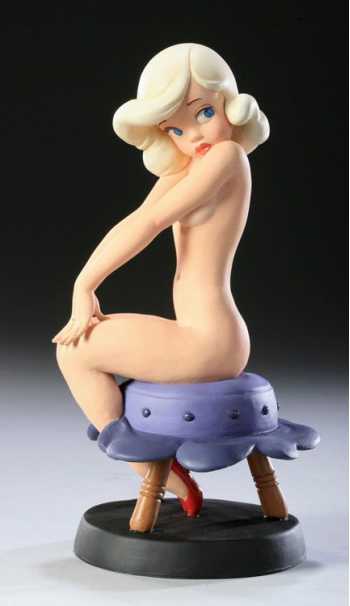 Long unavailable, we have just one!

Based on the Disney animator's drawings and sculpted by Kent Melton, this 9 1/4" tall hand-painted statue is utterly charming. This variant of the little nude has blue eyes, blonde hair, and red shoes.

"Primarily known as a premiere animator for such studios as Disney and Walter Lantz, Fred Moore was equally famous for his drawings of alluring females. Based on his provocative sketches, this sensational Raven Moore Girl Polystone Statue is exquisitely sculpted by Kent Melton and will serve as a bombshell centerpiece addition to any collection! It stands approximately 9 1/4-inches tall."

Fred Moore was one of the all-time great Disney animators  one of the handful who created "Disney Style" and taught the Nine Old Men when they were young pups. His drawing ability was completely natural, and it was often said of him that he couldn't make a drawing that didn't have appeal. He truly defined the idea of "fluid" in animation, with lines leading organically to other lines, clear silhouettes, and movement that was as confidently audacious as it was supple. This brings us to the sculpture: it is of one the highly sought-after "Freddie Girls," pin-up babes drawn by Fred Moore primarily in the 1940's. They were mostly nude (thus sought-after by the male horndogs at the studio), and they utilized all of Moore's talents for fluidity, charm, appeal, and great posing, although channeled for a slightly different (ahem) purpose. Only glimmers of them got to the screen ("All the Cats Join In" in Make Mine Music, the centaurettes in the Pastoral Symphony section of Fantasia), but they were so well-known and admired by animation artists that they are as much a part of animation history as the classic work that continues to inspire us to this day.