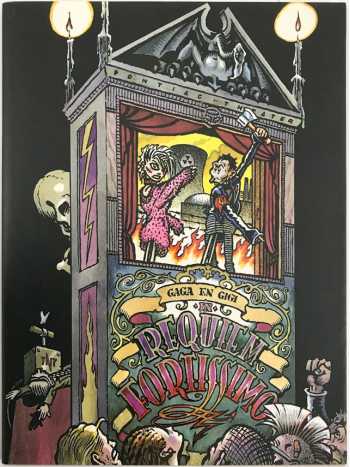 Peter Pontiac's post-apocalyptic punk fable 'Requiem Fortissimo', was serialized in Wordt Vervolgd in 1988 and published in book format by Casterman in 1990. Here it is in all's it glory.

Peter Pontiac is generally considered the "godfather" of Dutch underground comix. He rose to prominence in the hippie scene of the late 1960s, and was one of the most influential artists of Dutch underground comics of the 1970s, together with Joost Swarte and Evert Geradts. He continued to remain a prominent artist and designer within alternative circles in the following decades. Although widely praised for his raw, personal, and highly detailed artwork, Pontiac has mostly remained within the realm of subcultures, and never turned mainstream. He was the first Dutchman to draw autobiographical comics, and thus paved the way for later artists such as Gleever, Barbara Stok and Michiel van de Pol. Pontiac not only drew stories about sex, drugs and rock 'n' roll, but also underwent this lifestyle personally. Many of his comics have analyzed heavy-handed subjects such as his heroin abuse ('The Amsterdam Connection', 1977) and his father's past as a Nazi collaborator and SS journalist ('Kraut', 2000). He is also well-known for his illustrations for music magazines, posters and record covers.