Sign in | Register
HomeSketchbooksGators and Other Walking Bags of Thought: The Works of Phil Mendez, Sketchbook #4 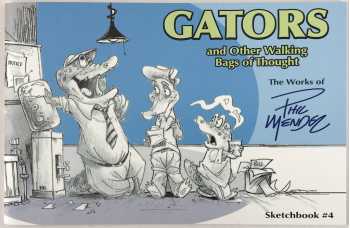 A new collection of Phil Mendez's charming cartoon animals, this volume focuses on alligators and includes a few illustrated stories.

Phil Mendez worked as an animator at the Disney Studios and Hanna-Barbera before creating his own little animation empire based on his creation of Kissyfur, a little bear that spawned four prime-time specials, two seasons of Saturday morning shows and a ton of merchandise.