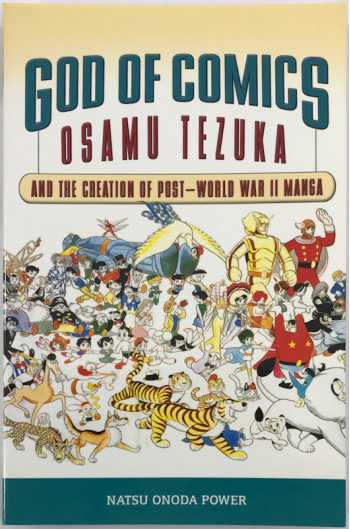 Cartoonist Osamu Tezuka (1928-1989) is the single most important figure in Japanese post-World War II comics. During his four-decade career, Tezuka published more than 150,000 pages of comics, produced animation films, wrote essays and short fiction, and earned a Ph.D. in medicine. Along with creating the character Astro Boy (Mighty Atom in Japan), he is best known for establishing story comics as the mainstream genre in the Japanese comic book industry, creating narratives with cinematic flow and complex characters. This style influenced all subsequent Japanese output. God of Comics chronicles Tezuka's life and works, placing his creations both in the cultural climate and in the history of Japanese comics.

The book emphasizes Tezuka's use of intertextuality. His works are filled with quotations from other texts and cultural products, such as film, theater, opera, and literature. Often, these quoted texts and images bring with them a world of meanings, enriching the narrative. Tezuka also used stock characters and recurrent visual jokes as a way of creating a coherent world that encompasses all of his works.

God of Comics includes close analysis of Tezuka's lesser-known works, many of which have never been translated into English. It offers one of the first in-depth studies of Tezuka's oeuvre to be published in English.