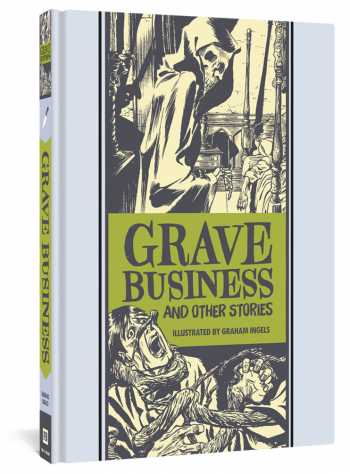 Even in an era of explicit horror films, "Ghastly" Graham Ingels still delivers a shock to readers with his grisly depictions of the stomach-churning fates of the evil men (and women) in these stories--leavened only by a sly wink to the reader and a generous dose of dreadful puns. Ingels's brushwork oozes ominously across every panel, perfectly setting the mood for the shudder-inducing fates of such corrupt characters as the sadistic asylum director, the political candidate who murders his opponent, the ventriloquist with the homicidal dummy, the millionaire who persecutes an aged junkman, and the medieval duke who runs over a young boy with his carriage then taxes the peasants to pay for cleaning up his victim's blood. Like every book in the Fantagraphics EC line, Grave Business And Other Stories superbly showcases these classic comic book masterpieces and enhances the reader's experience with commentary and historical and biographical detail from EC experts.

Graham Ingels (1915-1991), began working for EC Comics, drawing Western, romance, and crime stories, in 1948. But it was with the advent of EC's horror titles that "Ghastly" Graham Ingels's detailed work perfectly evoked the proper mood for the kind of wickedly macabre stories EC excelled at, and it made him a fan favorite. Ingels drew the lead feature for every issue of Haunt of Fear starting with #4, but his work, "hosted" by his signature character, the Old Witch, appeared regularly in all three EC horror titles and in Crime SuspenStories. In 1989, Ingels returned briefly to the comics landscape when he created a series of oil paintings featuring the Old Witch.