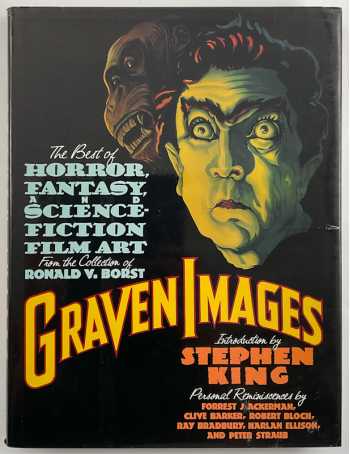 One of the greatest collections of rare & classic movie posters.

Ghouls, goblins, mummies, vampires, werewolves, zombies; mind-bending flights of fancy, apocalyptic visions of the future, electrifying jolts of supernatural fright, twisted glimpses of warped imagination... For most of the twentieth century, the film genre that has come to be known as "horror, fantasy, and science fiction" has produced not only the biggest thrills and chills but some of the greatest poster art ever. From seminal works such as The Cabinet of Dr. Caligari (1919) and The Phantom of the Opera (1925) to such classics as Dracula (1931) and Frankenstein (1931); from the cult "B" films of the Fifties through great Sixties blockbusters such as Psycho (1960), Planet of the Apes (1968), and Stanley Kubrick's 2001: A Space Odyssey (1968), the art created to promote these beloved films--some of which are cinematic classics, others second-rate curiosities--shines on long after the last flickering image has died on-screen. Ronald V. Bost has amassed nearly six decades worth of vintage film memorabilia, and in this book he reveals his extraordinary collection. As accompaniment, seven legendary authors of the fantastic offer their wit and wisdom. The book features more than 500 of the finest vintage film posters (and related memorabilia).