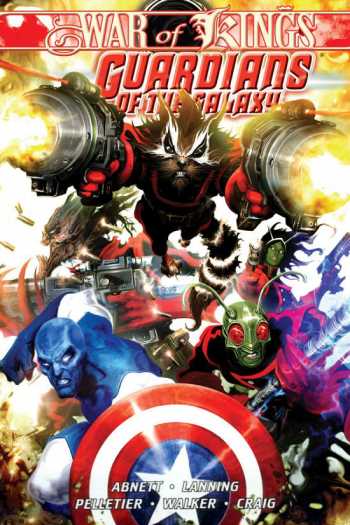 If the Guardians have broken up, who will save the galaxy from the Church of Universal Truth, the Badoon and King Blastaar? First there was the cosmos saving. Then there was the betrayal. Now there's the breakup. As Star-Lord's squad head off on their own pursuits, a universe of innocents asks, "Where are our Guardians?" Fear not, helpless citizen of the stars, for a new team has risen and they are ready to put a beat down on any bad guys bent on destruction! These new Guardians include the brew-slurping Bug; the time-lost Major Victory, Gamora, the green-skinned assassin with mental issues; and an angry walking tree named Groot - all led by Rocket Raccon, a talking mammal with his raygun set on a hair-trigger. Just as the sabers begin rattling in the War of Kings, outer space's elite cadre of saviors has seen better days. Feel guarded now?

Collecting GUARDIANS OF THE GALAXY #7-12.