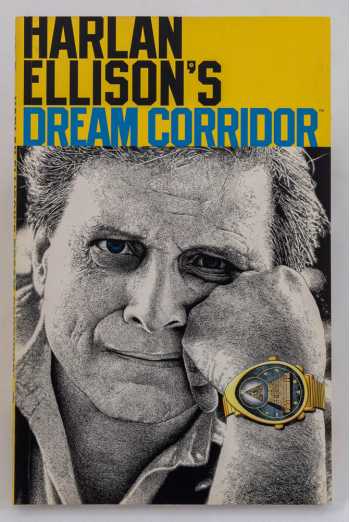 Ever wonder what it would be like to walk into someone else's mind and have a look around? Well, what if that person happened to be a brilliant storyteller whose imagination has captivated millions of readers over the past five decades? In the award-winning anthology Harlan Ellison's Dream Corridor, we have had both the privilege and peril of rooting around in the eponymous fellow's noggin to see what makes him tick - and what engrossing stories have been hidden away in the cracks and crevices of his gray matter. The words of world-renowned science-fiction author Harlan Ellison are once again translated onto the page by top comics creators, including Paul Chadwick, Neal Adams, Steve Rude, Gene Colan, Steve Niles, Gerard Jones, Richard Corben and the legendary Oz illustrator Eric Shanower. Most of these stories have never before seen print!

Ten years! Ten years of pain and gnashing of teeth! Ten years of deprivation and desolation! But the wait is over-at last! Yes, it is the ultimate, spectacular, senses-shattering, clobbering-time final damn volume of the Dream Corridor, hosted by the ever charming and irascible Harlan Ellison, and you can finally kiss those ten years of torment good-bye!

At long last, see Harlan crucified! See Harlan disemboweled! See Harlan used as target practice and served up in stew! Pour yourself an otherworldly cocktail, with a pinch of Geritol for all those years, and snuggle down into the Dream Corridor! Your host for this amazing final volume is of course HE himself, not just the most award-winningest author on the planet but now his very own registered trademark! Aiding and abetting Harlan in his own destruction is the Eisner-winning Best Artist Eric Shanower, as they introduce each of ten fabulist tales in this volume with a fabulous tale of their own. Too cranky to go down without a fight, the man who needs no introduction presents this brand-new collection of his own stories, written and drawn by the likes of Mark Waid, Gene Ha, Steve Rude, Steve Niles, Paul Chadwick, Gene Colan, and more, including the very last work ever by Superman artist Curt Swan. Come on in, throw a few knives, pull up alongside Hemingway and Einstein for a game of poker, and gamble on enjoying your stay in the Dream Corridor . . . because you may never return! Named Grand Master at this year's Nebula Awards, Harlan Ellison now officially joins the ranks of literary legends such as Isaac Asimov, Arthur C. Clark, and Ray Bradbury in being honored for lifetime achievement in science fiction and fantasy.