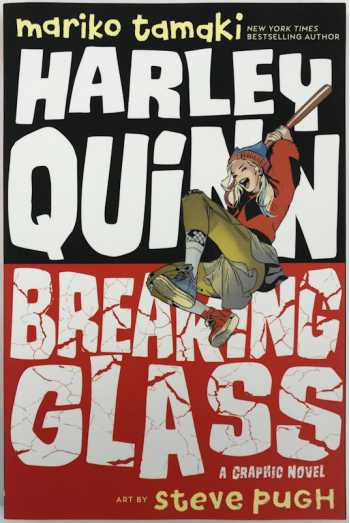 Harley Quinn: Breaking Glass is a coming-of-age story about choices, consequences, justice, fairness, and progress and how a weird kid from Gotham's poorest part of town goes about defining her world for herself. From Eisner Award and Caldecott Honor-winning author Mariko Tamaki (This One Summer, Supergirl: Being Super).

Harleen is a tough, outspoken, rebellious kid who lives in a ramshackle apartment above a karaoke cabaret owned by a drag queen named MAMA. Ever since Harleen's parents split, MAMA has been her only family. When the cabaret becomes the next victim in the wave of gentrification that's taking over the neighborhood, Harleen gets mad.

When Harleen decides to turn her anger into action, she is faced with two choices: join Ivy, who's campaigning to make the neighborhood a better place to live, or join The Joker, who plans to take down Gotham one corporation at a time.

Harley Quinn: Breaking Glass is at once a tale of the classic Harley readers know and love, and a heartfelt story about the choices teenagers make and how they can define--or destroy--their lives.

Mariko Tamaki is a Canadian writer living in Oakland. Works include New York Times bestseller This One Summer and Skim with Jillian Tamaki , Emiko Superstar with Steve Rolston and the YA novel (You) Set Me on Fire. This One Summer was the winner of Printz and Caldecott Honors in 2015 and received the Eisner award for Best Graphic Album.