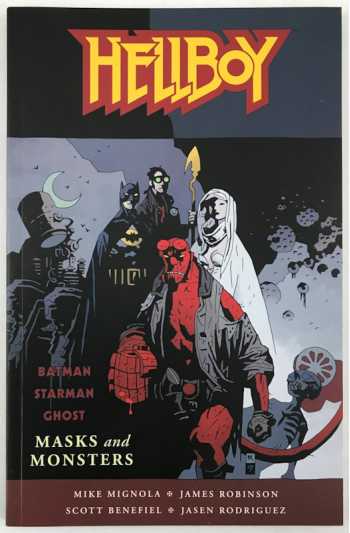 This unread first edition/first printing came directly from Mike's library and is autographed by Mike inside the book. Out of print.

Batman/Hellboy/Starman and Ghost/Hellboy, plus six pages of sketchbook material and variant covers including Ghost/Hellboy by Claire Wendling.

Hellboy joins forces with Batman and Starman in an adventure that takes them from the rooftops of Gotham to the steamy jungles of the Amazon, to rescue the first Starman, Ted Knight, from a secret Nazi organization that plans to use him to resurrect an elder god. Next, Hellboy travels to Arcadia in search of Ghost, a spectral vigilante caught up in a web of intrigue orchestrated by an ancient mask.

These two crossover stories have long been out of print, and have never before been collected into the Hellboy trade-paperback line.

Fine
Signed by Mike Mignola inside the book