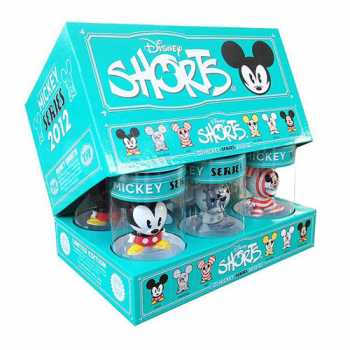 This official Disney collectible figure series was patterned after the hugely successful Vinylmation series in the Disney theme parks, but was devised solely by Disney Animation fan Francisco Herrera and licensed by Disney for sale in Mexico.

Francisco has done an incredible job creating and designing these official Disney collectible figures. The sculpt is better than the Vinylmation figure. And the artwork on the individual figures shows Francisco's devotion and his attention to detail. (For example, the back of the Classic Mickey head has a rear view of Mickey's classic pose that I have never seen before!)

You get six different versions of Mickey from throughout the years.

This extremely rare Disney Vinyl Collectible is limited to only 1000 sets. Up until now only available in Mexico. It is sold out in Mexico. Get it on the first series while you can.

Disney Shorts is all about those little things that make a huge difference in life. Magic is in the details so be part of these collectibles based on your favorite characters and movies of the wonderful world of Disney!