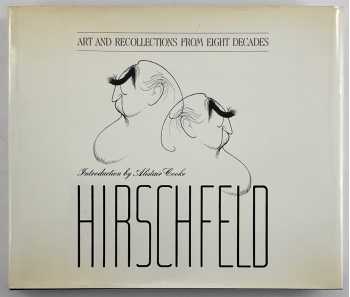 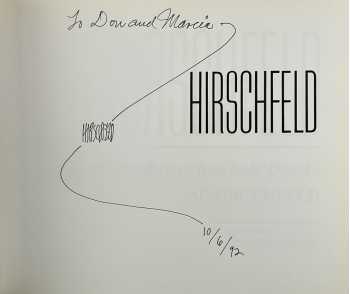 Hirschfeld's own selections of his most important works--over 340 drawings--more than three-quarters not been seen since their initial publication in the newspapers or magazines that commissioned them. Introduction by Alistair Cooke. Out of print.

This is a grand celebration of the variety and virtuosity of Al Hirschfeld, the legendary artist who redefined caricature and exemplifies Broadway to generations of theater lovers. This stunning collection--including more than 330 black-and-white line drawings and lithographs as well as nine color plates--presents the best work of the American institution whose drawings, Jules Feiffer has written, "are to caricature what Fred Astaire was to dance."

For sixty-five years, Al Hirschfeld has been the world's most illustrious historian of Broadway, a fact demonstrated by this lavish retrospective, the only book to survey every phase of Hirschfeld's career Here are Hirschfeld's own selections of his most important work from the nineteen twenties through the eighties and into the nineties-the great musicals, from On Your Toes and Jumbo in the thirties to Les Misérables and Phantom of the Opera in the eighties (and Miss Saigon this year); the best plays, from Strange Interlude, Abe Lincoln in Illinois, and The Glass Menagerie to Waiting for Godot, and all the larger-than-life personalities, from Ethel Merman, Zero Mostel, Mary Martin, Katharine Hepburn, Carol Channing, and Mae West to Barbra Streisand, Cher, Meryl Streep, Frank Sinatra, and the Beatles (in addition to Charlie Chaplin, Buster Keaton, Greta Garbo, Clark Gable, and many other favorites). But Hirschfeld's brilliance has always encompassed much more than Broadway and the movies; highlighted as well are Hirschfeld's rarely seen early lithographs, his political drawings and portraits of world leaders, his work from Moscow in the twenties, and his dramatic work in color of Harlem in the forties and of the Kabuki theater of Japan. This is a book of thrilling surprises.

More than three-quarters of the drawings in Hirschfield either have never been published or have not been seen since their initial publication in the magazines and newspapers that commissioned them. The collection also includes never-before-reprinted drawings from Hirschfeld's sixty-five-year association with The New York Times. From his very first theater drawing (of Sacha Guitry, published in the New York Herald Tribune on December 26, 1926) to the recently issued series of five U.S. postage stamps honoring great comedians, Hirschfield spans the entire length of a magnificent career and pays tribute to the genius of an artist who, at eighty-eight, is still reinventing the magic of line.