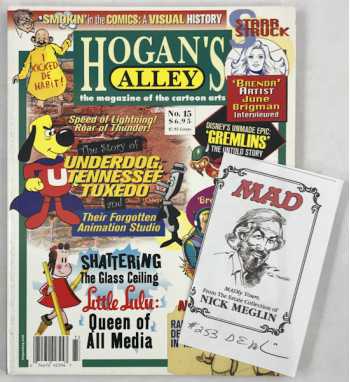 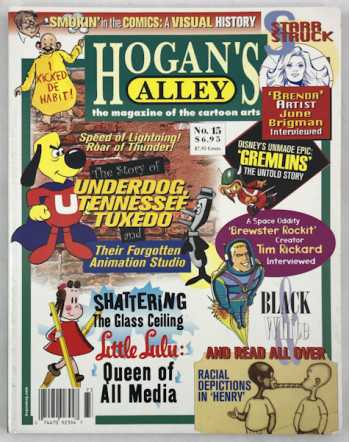 This copy is from the collection of longtime Mad Magazine editor Nick Meglin with a Certificate of Authenticity "Madly Yours, From The Estate Collection of Nick Meglin" numbered and signed by his daughter Diane Meglin.

"The Magazine of the Cartoon Arts" Every issue is full of interesting articles and fun and quirky features on the obscure regions of comic books, animation, and especially comic strips.

This issue takes a long look at Total Television, the studio that produced such animated classics as Underdog and Tennessee Tuxedo. Inside is an interview with a group of comics editors at top newspaper syndicates, pulling back the curtain on an aspect of the cartooning business that has mystified many. If you've ever wondered if your favorite comics character has ever puffed a cigarette, you should pick up this issue, which chronicles the long and very smoky history of tobacco use in the comics! Also chronicled is the tortured - and ultimately futile - life of one of Walt Disney's great disappointments: the unmade animated adaptation of The Gremlins. If you've thought that everything Walt touched turned to gold, this article will convince you otherwise! The issue also launches into outer space with an interview with Tim Rickard, creator of the popular new comic strip Brewster Rockit, Space Guy. Plus, the evolution of Little Lulu; an interview with the versatile June Brigman, veteran comic book artist and the current artist on Brenda Starr; and the life and work of Wally Wallgren, one of the best and most prolific cartoonists you've never heard of!