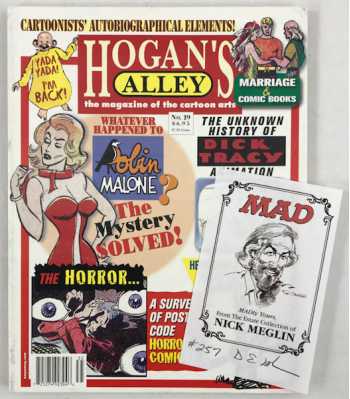 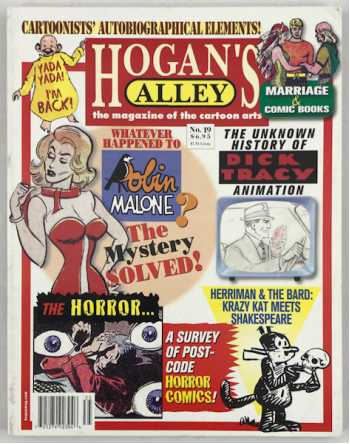 This copy is from the collection of longtime Mad Magazine editor Nick Meglin with a Certificate of Authenticity "Madly Yours, From The Estate Collection of Nick Meglin" numbered and signed by his daughter Diane Meglin.

"The Magazine of the Cartoon Arts" Every issue is full of interesting articles and fun and quirky features on the obscure regions of comic books, animation, and especially comic strips.

An interview with David DePatie, the lesser known half of the DePatie-Freleng animation studio.

RF Outcault's other strip, after The Yellow Kid

A roundtable interview with four cartoonists who made the transition from drawing comic books to newspaper comic strips. What are the creative challenges they confront, and how have the changing economics of the comics industry influenced their career paths?

A look at the various, and largely unsuccessful, efforts to adapt Dick Tracy to animated form over the decades, with lots of never-reprinted Tracy art from the legendary UPA studio!

The extensive influence of the immortal William Shakespeare on the equally immortal Krazy Kat, with many examples presented and annotated.