Sign in | Register
HomeNew ArrivalsHollywood Horror: From Gothic To Cosmic 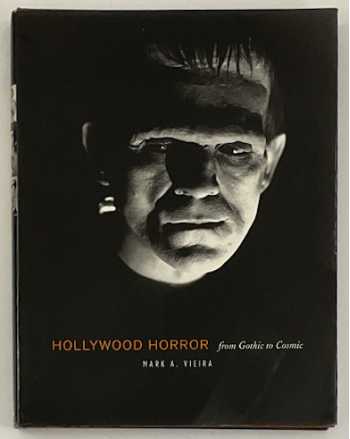 260 gorgeous photographs -- rare and unforgettable images -- many never before published -- culled from 160 horror films 1923-1968 divided into the subgenres Gothic, Psychic, Atomic, and Cosmic.

Illustrated with 260 pristine still photographs - many never before published - culled from 160 films, the book captures all the mystery, power, dark humor, and chilling beauty of cinematic horror. Among the featured films are seminal icons such as James Whale's Frankenstein and Tod Browning's Dracula; the steamy pre-Code jungle sorcery of The Island of the Lost Souls; big-budget thrillers like The Uninvited and The Picture of Dorian Gray; the cold-war science fiction of The Invasion of the Body Snatchers; sublimely ridiculous "creature features" such as The Blob, and terrifying thrillers like Hitchcock's Psycho.

Horror films are an escape valve for the American psyche. "No matter what was happening in the world outside... the moviegoer could snuggle into a theater seat and travel to a place where screaming felt good," notes film historian Vieira, who charts these journeys with smart prose and a loving attention to detail. He maps the genre from its genesis in 1923 through 1968, relating how world events infused its style and substance. Whether the scare technique relied on the power of suggestion or played on fears of Communist infiltration, horror movies reflected the mood of the country. To add spice, Vieira skillfully intertwines plots of the films with anecdotes by actors, writers and producers. Telling details, such as the grotesque make-up fashioned by actor Lon Chaney or the influence of German Expressionism, provides insight into the craft of filmmaking. In addition, the painstaking work patterns of Alfred Hitchcock and Roman Polanski are contrasted with the expediency required by William Castle and Roger Corman. All, contends Vieira, were adept at raising goosebumps without slathering the screen with the gore that defined later offerings, such as Night of the Living Dead. The inclusion of rare onset photographs caps this well-researched book. The publicity shots, particularly of early works, demonstrate an astounding mastery of lighting and composition. Ironically, many of these stills depicted scenes that never appeared in films. But they remain artistic gems enhanced by the sharp quality of the reproductions. Vieira's enthralling behind-the-scenes take reveals the insider secrets that brought this shadow world to light.

Near Fine in Very Good+ dustjacket (remainder mark, light shelfwear to boards, moderate wear and scuffing to the dustjacket)