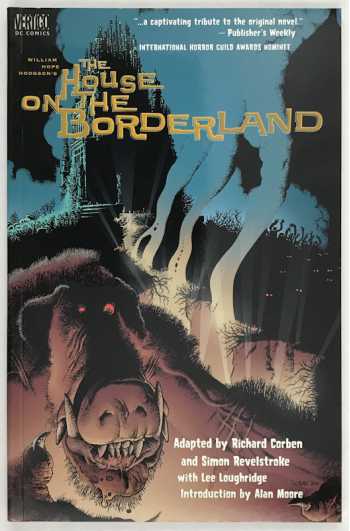 Out of print in both hardcover and softcover.

It sits astride two worlds -- our bleak world of colorless normality and the realms of cosmic horror where reason may yet have a last chance to conquer fear. Forgotten until now, the House on the Borderland awaits you.

THE HOUSE ON THE BORDERLAND is a 96-page VERTIGO graphic novel by comics legend and illustrator Richard Corben (HELLBLAZER, Heavy Metal, Den) and scripter Simon Revelstroke. Their work is based on The House on the Borderland by William Hope Hodgson, a timeless tale initially published in 1908 that tells a story of supernatural paranoia blending science fiction, fantasy and Lovecraftian horror in a potent mix.

Featuring an introduction by comics legend Alan Moore that offers an appreciation of Hodgson's contribution to the horror pantheon, THE HOUSE ON THE BORDERLAND is a must-read for connoisseurs of the genre, offering a phantasmagoric tour of the razor-thin line between fantasy and reality, life and sleep, hope and death.