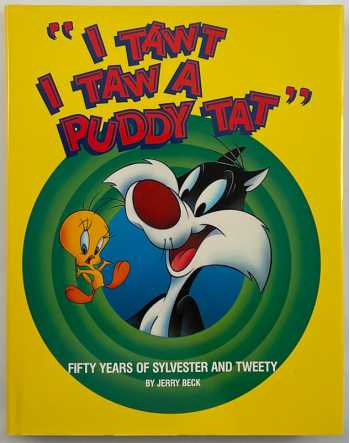 The history of Sylvester and Tweety

"I Tawt I Taw a Puddy Tat" is a splendidly illustrated biography of Sylvester and Tweety's first half-century. It shows us their birth in early film guises and the hilarious variations on the case theme that have kept audiences on edge for years, and includes more than 300 stop-motion scenes via original production art and image enlargements. Special sidebars explain how Warner Bros. cartoons were animated, highlighting every phase of the process.

In the same lively layout as the highly praised that's All Folks! and Bugs Bunny: Fifty Years and Only One Grey Hare, I Tawt I Taw a Puddy Tat is one of the grandest, most jubilant cartoon books ever published.