Sign in | Register
HomeNew ArrivalsI Thought You Would Be Funnier 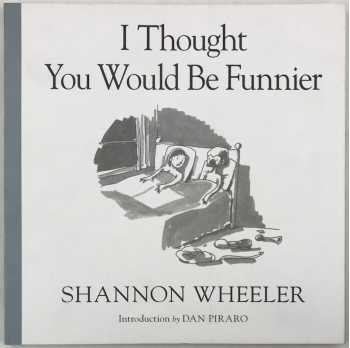 A new cartoon collection from the mind of Eisner Award-winning, Harvey nominated and current New Yorker Magazine cartoonist, Shannon Wheeler! It's the best-of-the-best of what's left on the cutting room floor from Wheeler's cartoon submissions to The New Yorker Magazine. Never seen in print before anywhere else!

Eisner Award winning artist Shannon Wheeler is best known for his character Too Much Coffee Man. Too Much Coffee Man, as a comic has appeared internationally in newspapers, magazines and comic books. Dark Horse Comics has published five graphic novels that collect most of the work. 2006 saw the production of a Too Much Coffee Man Opera at the Portland Center of Performing Arts. It's the first opera to have been based on a comic book. His weekly strip Postage Stamp Funnies appeared in print edition of The Onion.