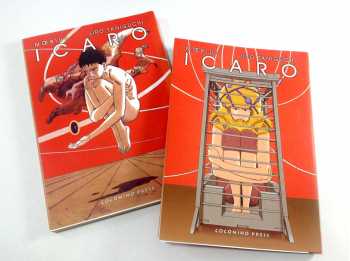 The Italian edition of Moebius and Taniguchi's sci-fi graphic novel, Icaro. This is the complete two volume set.

Two award-winning graphic artists have produced an outstanding tale of cyberpunk adventure and the quest for freedom. Icaro is a thrilling manga science fiction adventure in the tradition of Akira, Ghost in the Shell and Clamp's sf sagas. Icaro is the mind-bending, fast-paced adventure of a young man, Icaro, with the ability to fly and a young woman, Yukiko, who risks her life -- and more -- to help Icaro achieve his dream. Best of all, it capitalizes on Taniguchi's ability to depict a vast and oppressive advanced science laboratory that has made Icaro its guinea pig and will use all its resources to keep him imprisoned for study. Icaro's fight to be free and Yukiko's sacrifice to aid him in his quest make this one of the most inspiring manga stories and one of the first significant original manga collaborations between East and West.