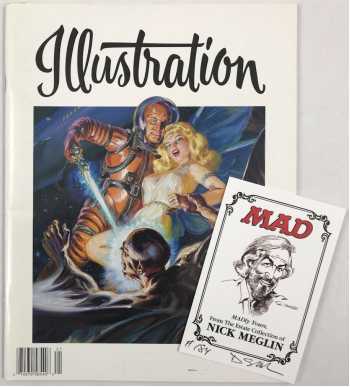 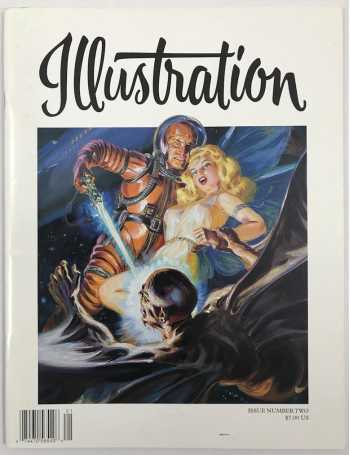 This copy belonged to longtime Mad Magazine editor Nick Meglin, a lifelong friend of Frank Frazetta. With a Certificate of Authenticity "Madly Yours, From The Estate Collection of Nick Meglin" numbered and signed by his daughter Diane Meglin.

This is the original edition of the second issue of this great magazine. Lengthy articles on the varied career of Norm Saunders and 1940s-50s illustrator Perry Peterson, an interview with collector & publisher Russ Cochran, and stunning color reproductions of four Frank Frazetta Canaveral Press pen & ink drawings.

"It was Meglin who recruited old friend Frank Frazetta to paint a spot-on visual parody of the painted Breck Shampoo ads of the mid-'60s that featured long-haired Beatle Ringo Starr, an assignment that led to Frazetta becoming one of the top movie poster artists of the 1960s. Although an accomplished artist himself who earned a certificate from the School of Visual Arts (where he met lifelong friend and colleague Angelo Torres), Meglin (as he would have readily admitted) was not in the same league as some of the artists he hung out with in the legendary Fleagle Gang, a group that included Frazetta, Al Williamson, Roy Krenkel, and future Mad contributors Angelo Torres (a classmate at the School of Visual Arts) and George Woodbridge. In addition, he wrote a famous profile of friend Frank Frazetta for American Artist magazine, which was the only issue of the magazine to sell out completely." --The Comics Journal

Near Fine (mild thumbdents to front cover, mild wear)
From the collection of Nick Meglin with a Certificate of Authenticity