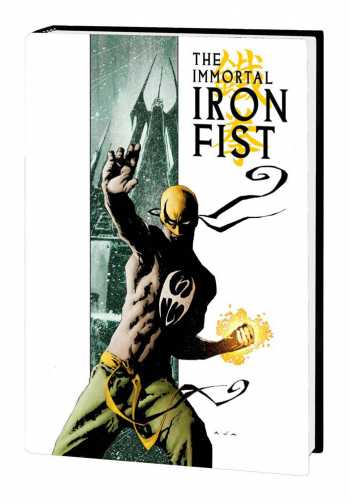 Experience a brand-new kind of Iron Fist story - one steeped in legends and fables, magic and adventure, and a historical sweep that stretches back through the centuries - as the living weapon returns in this hard-hitting martial-arts epic by Ed Brubaker, Matt Fraction, David Aja and a who's who of artistic collaborators! Orphaned as a child and raised in the lost city of K'un-Lun, Danny Rand returned to America as the mystical martial artist Iron Fist - but all his kung-fu skills can't help him find his place in the modern world. After learning the hard way that the centuries-spanning legacy of the Iron Fist holds more secrets than he ever dreamed possible, Danny is ushered to the fabled city of K'un-Lun to fight in a tournament against the Immortal Weapons of the Seven Capital Cities of Heaven. It is a round of games that occurs every 88 years as the different cities connect together on the same mystical plane. At stake is the life of his friend, the legacy of his father and mentor, and the future of K'un-Lun. And despite the awesome new powers and knowledge granted to him by the mysterious Orson Randall, will Danny be ready when the tournament calls his name? Plus: There have been sixty-six men and women to carry the mantle of the Immortal Iron Fist. Witness their story in The Book of the Iron Fist.