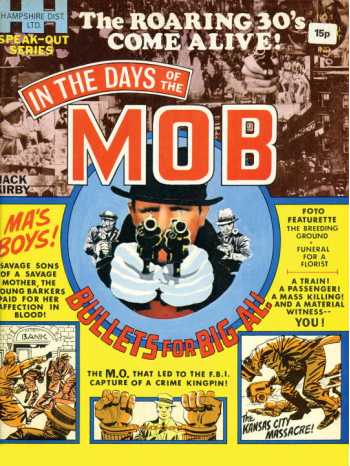 After leaving Marvel Comics at the end of the 1960s, Jack Kirby came to DC, where he soon created the series of super-hero comics known collectively as "The Fourth World." One of his first projects for DC was the black and white magazine In the Days of the Mob, which featured on stories of organized crime in the 1930s in the style of the TV series "The Untouchables" and "The Godfather" movies.

In the Days of the Mob #1 features crime stories from the Roaring 30s: "Welcome to Hell," "Ma's Boys," "Bullets for Big Al," "Kansas City Massacre," and "Method of Operation." All stories and pencils by Jack Kirby, inks by Vince Colletta. Two pages of cartoons by Sergio Aragones. And a two-page text story, "Funeral for a Florist," by Mark Evanier and Steve Sherman.