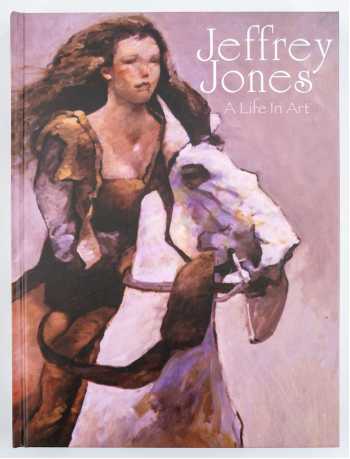 This excellent art book on Jeff Jones sold out its first printing very quickly. Almost entirely art, including a number of previously unpublished pieces. There is just a very brief introductory text. After the first printing, they changed the cover to a painting of Tarzan.

Over the past 40 years, there have been few artists who have received as much acclaim and garnered as much attention as Jeffrey Jones [originally known as Jeff Jones, and after his sex change as Jeffrey Catherine Jones]. One of the most significant artists of the 20th Century is now one of the most significant artists of the 21st Century. Known as one of the four "Studio" artists - sharing an actual loft along with Berni Wrightson, Michael Wm Kaluta, and Barry Windsor Smith - a book on the four's artwork was published in 1979. From his comic story work for the mature audience magazines Cavalier [Touch], National Lampoon [Idyl], and Heavy Metal [I'm Age] - Jones earlier did only five stories and a handful of covers for the regular comic book publishers DC and Charlton - to his 200+ fantasy book covers for such authors as Robert E Howard, Dean Koontz, Fritz Leiber, Andre Norton and many others, to his move into expressionistic fine art, Jones has inspired generations of painters and artists. This beautiful volume of his personal favorites will only enhance his reputation and cement his standing as one of America's greatest living artists. World-renowned illustration artist Frank Frazetta called Jeffrey Jones "the greatest living painter."

Mild blunt bump to the top of the spine otherwise Very Fine, issued without dustjacket