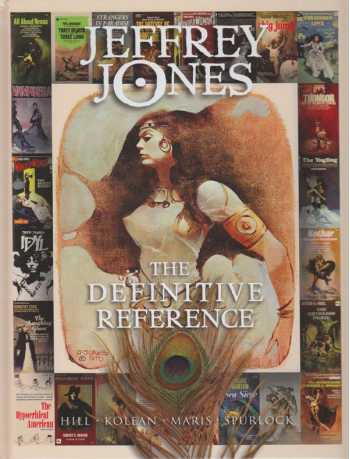 This Slipcased Hardcover Edition is limited to only 400 copies and features an alternate cover and a 16-page bonus folio not included in the regular hardcover or paperback editions.

Legendary artist Frank Frazetta once called Hugo Award and World Fantasy Award winner Jones "the great living painter". Jones and Frazetta were the top two heroic fantasy book cover artists of the 1960's and '70's. As well as sci-fi and fantasy, Jones famously contributed to 1972-75 issues of National Lampoon with the innovative comics feature "Idyl", and was a member of The Studio in New York City with contemporaries, Barry Windsor-Smith, Bernie Wrightson and Michael Wm, Kaluta. The Studio became the subject of a landmark book from Dragon's Dream in 1979. By the '80's Jones relocated to the Woodstock area to pursue Fine Art and, in 1998 began gender transition via hormone replacement therapy.

Near Fine in a Near Fine slipcase (bump to left bottom corner of slipcase and book)
Limited to 400 deluxe copies. Slipcased Hardcover Edition featuring a 16-page bonus folio and an alternate cover.