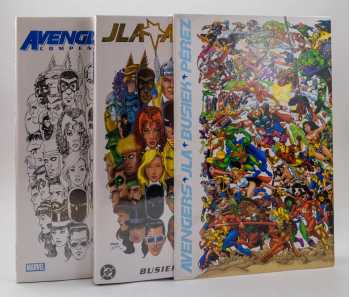 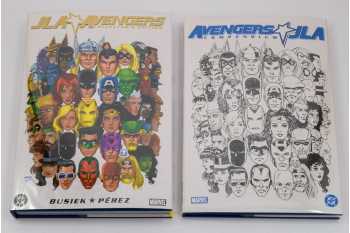 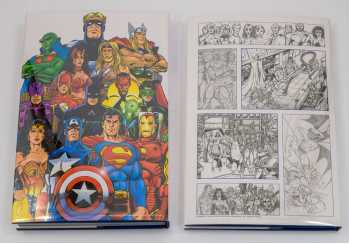 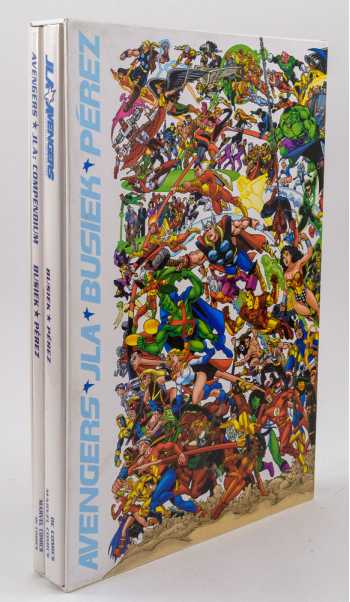 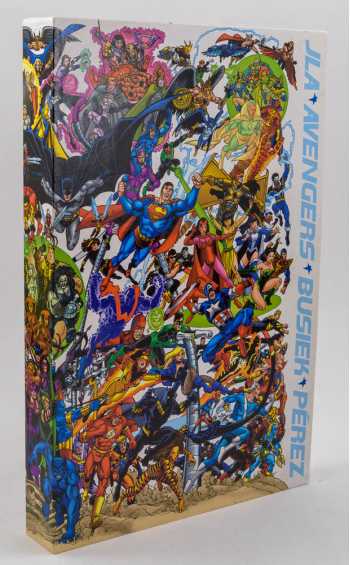 Only one printing and long out of print. With an all important concordance for this cross-over miniseries.

It's an event that will never be forgotten. The once-in-a-lifetime crossover event that brought these two historic super-teams together and rocked the comics world receives the deluxe treatment it deserve! This oversized, slipcased two-volume set collects the legendary 4-issue miniseries with a full complement of bonus features!

The first volume in the slipcase contains the 4-issue miniseries written by Kurt Busiek (Astro City, Superman: Secret Identity) with stunning art by George Pérez (Wonder Woman) and introductions by Stan Lee and the late Julius Schwartz, the architects of the original iterations of the Avengers and the Justice League of America, respectively. This volume also features a key to the characters on the intricately detailed cover of JLA/Avengers #3.

The 64-page Compendium, featuring a new cover by Pérez, contains the original 21 pages of pencils from cancelled 1980s crossover by Pérez and writer Gerry Conway, plus an article on it by former DC editor K.C. Carlson, a look at several other unofficial crossovers, and more! But that's not all- this volume also features the JLA/Avengers miniseries proposal and plot synopses, and annotated notes from Busiek for all the obscure characters and creatures crammed into the pages.

There are no plans to reprint this historical set, so this is the only opportunity to own the material reprinted in the Compendium. Don't miss out on what's sure to be a crown jewel in any comics collection!