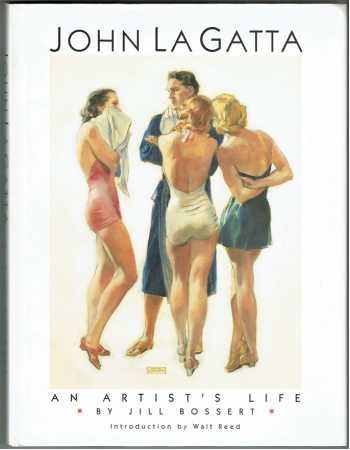 The first & only monograph on this fantastic golden age glamour illustrator. The first 60 pages are an illustrated biography of the artist. The following 100 pages are purely artwork. Introduction by Walt Reed.

Glamour, grace, and beauty epitomized John La Gatta's work and life. This book tells the extraordinary story of the artist's career and the loving partnership he shared with Florence, his beautiful wife of 58 years. As one looks at La Gatta's illustrations from the 1920s and 1930s, one cannot but feel the nostalgic tug of a time when a life of elegance and glamour was a fantasy harbored by the American masses. What was fantasy for the many, however, was reality for a few. While America was plunged into the Great Depression, La Gatta's ability to portray the well bred, the refined and the sensual, afforded him a life that reflected the characters he created for the pages of America's most popular magazines.

John La Gatta's story is classically American--an immigrant's successful rise to wealth and fame by dint of his talent, ambition, some luck and extremely hard work. After the death of his mother, La Gatta left the graceful life in Naples he had known as a child for the rough Lower East Side of New York at the turn of the century. His early aptitude in art was recognized and nurtured so that by the time he was in his late teens he was already a working illustrator. Rising quickly in his profession, La Gatta made a fateful trip to Cleveland to join one of the burgeoning art studios. There he met Florence Olds, an art student herself, whom he wooed and wed.

Although La Gatta's early advertising work often featured workingmen in overalls, he longed to illustrate women. A six month sabbatical produced a portfolio that changed his life. From then on he filled the pages of the top periodicals with elegant, sensuous women in posh settings. Though he did the occasional advertising campaign, most of his remarkable output was for the more prestigious and more highly paid editorial pages of America's most prominent magazines.

The La Gattas lived lavishly, as befitted their place in society. The handsome and dapper artist was a celebrity in his own right. With showplaces on Long Island and in Woodstock, a yacht and custom-made cars, the La Gattas kept servants, belongs to prestigious clubs and traveled in style. Memorabilia from the La Gatta family archives show the couple's brilliant life in the days before the illustration profession was forever changed by photography and television. In his later life, La Gatta pursued his love of fine art and became a respected teacher. In 1984 the Society of Illustrators inducted him into their Hall of Fame.

Readers who are familiar with La Gatta's work, will be in for a treat within the pages of this lavishly illustrated book. Those who have not yet had the opportunity to familiarize themselves with his work will find themselves introduced to a world of bygone beauty and elegance.

Near Fine in Near Fine dustjacket (upper corner lightly bent, some spots to top edge, interior new and unread, light wear to dustjacket)